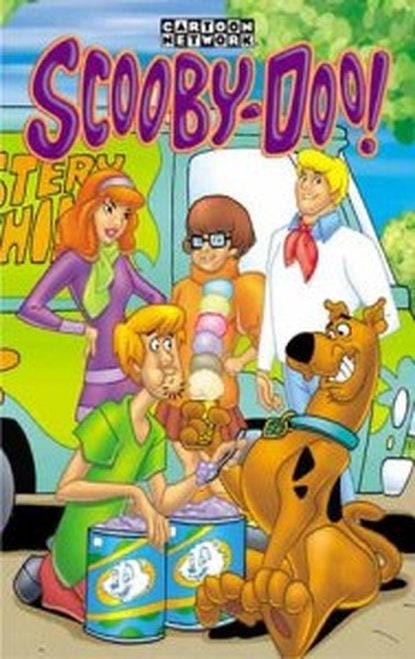 There is a mystery at the ice cream factory and your child can help Scooby-Doo and the gang solve it. The ice cream factory is throwing a big party to introduce a new flavor of ice cream but an angry polar bear tries to stop all the fun. Your child helps Scooby, Shaggy, Fred, Daphne and Velma stop the polar bear and save the day in this exciting personalized adventure.
© Hanna-Barbera

Shipping to United States only


The Dreamy Cream factory was throwing a huge ice cream party, and Marcus Alan Peterson, age 6, of Stevens Point, Wisconsin, was invited! Scooby-Doo was there too, along with his friends Shaggy, Fred, Daphne and Velma. Everyone at the party was excited to taste Dreamy Cream's newest ice cream flavor: Polar Berry!

The fun was ruined when a big, angry polar bear charged into the party.

Everyone at the party ran away, except for Scooby-Doo and Shaggy. Even an angry polar bear couldn't keep them away from free ice cream!

“Run!” Marc Shouted to Scooby-Doo and Shaggy. The polar bear chased them all around the outside of the factory.

“Zoinks! That bear wants to eat us as much as we want to eat this ice cream!” Shaggy said.

Marc led Scooby and Shaggy through the factory door and slammed it shut. They were safe!

Marc, Scooby-Doo and Shaggy hurried to the ice cream laboratory. Fred, Daphne and Velma were there talking to the factory manager.

“Our laboratory has been wrecked!” said the manager.

“Why would a polar bear wreck an ice cream lab?” Marc asked.

“That's what we're going to find out!” said Velma.

“Zoinks! That creepy bear can't get his paws on the ice cream if we eat it all.” Shaggy told Marc.

They were so busy eating that they didn't notice the polar bear sneaking up behind them!

The polar bear chased Marc, Scooby-Doo and Shaggy under a machine that filled containers with ice cream.

“Like, this is too good to pass by!” Shaggy said.

They tilted their heads back and looked up. Ice cream squirted down out of the machine, right into their open mouths!

Marc had a plan to catch the polar bear. He spilled ice cream onto the floor in front of an open freezer. When the polar bear chased Scooby and Shaggy over the ice cream, they began to slip and slide.

“Grab onto something!” Marc shouted.

Scooby and Shaggy stopped themselves as the polar bear slid right into the freezer. Marc closed the door and the bear was trapped!

Everyone could see the bear through the freezer window. He was shivering in the cold.

“I give up! Let me out of here!” the bear said in a human voice.

Marc opened the freezer door and let the chilly polar bear out.

“Let's see who's underneath all that fur,” Fred said.

The polar bear was really the factory manager in disguise!

“I wanted to steal the secret formula for Polar Berry ice cream and make a fortune for myself,” he said.

“Now I can have my own ice cream party with Josh, Sami and Piper back in Stevens Point, Wisconsin,” Marc said.

“You deserve it! We couldn't have solved this mystery without you!” said Daphne. Marc waved as his new friends drove away in the Mystery Machine.

A Special Gift from

Please follow my shop to get updates on new products added.

Ship items back to me within: 7 days of delivery

I don't accept exchanges or cancellations

But please contact me if you have any problems with your order.

The following items can't be returned or exchanged

Because of the nature of these items, unless they arrive damaged or defective, I can't accept returns for:

I love that book! Great purchase!!!

Absolutely love the book! It's for my daughter's 2nd birthday and I know she is going to love it as well. It arrived quickly and is perfect.

0 items in your cart